Czech Republic
We Are Domi
Lights Off

There are some countries that really try. They have big national finals and send talented try-hard X Factor rejects and hire big name songwriters and blow half their GDP on staging and go to all the preview parties and film a lovely touristy postcard. And then there’s Czechia.

This year is the sixteenth year in a row they’ve entered without the Slovaks, and every year has been rusty nail in the foot rubbish. Their underwhelming debut in 2007 consisted of three mechanics from Kwik Fit morbidly growling, a (lack of) effort that earned them precisely one point in the first semi, from Estonia.

Things didn’t get much better in 2008 when they entered overproduced “something for the dads” act Tereza Kerndlová, whose flat vocals were tempered only by the inclusion of a winged DJ imploring us to “Have some fun“. We didn’t, and they scraped 1 point from Turkey and Malta, 2 points from Croatia and 5 points from Macedonia in their dismal semi.

In 2009 they entered the Czech Republic’s answer to Goldie Lookin’ Chain – an entry that featured a Tim Westwood lookalike in a luminous unitard, flanked by an Amy Winehouse lookalike artist and a handful of men who looked like waiters at a novelty tourist restaurant. On the night the Czechs received nul points from the 20 countries voting in that semi-final, becoming the 16th entry to achieve this result since the current voting method was introduced in 1975. 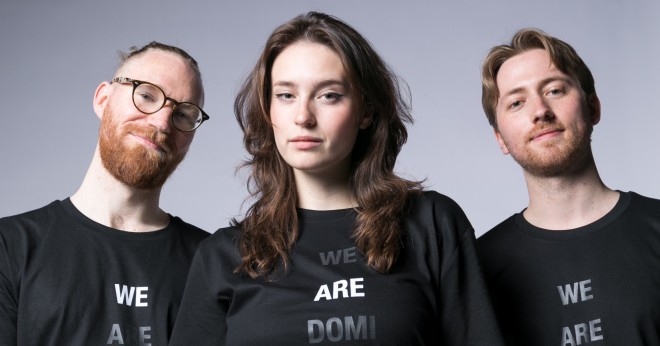 And so on and so on to be honest. We almost got Eurovision try-hard Elis Mraz, who was so bad that when she tried also to enter for San Marino, even the microstate was having none of it – and that left us with “We Are Domi”.

When your Dad is slurring at the TV “where do they find them from”, this year you can answer that question with “Leeds College of Music”, as the band was literally formed as a final year project for their undergraduate music degree there in 2016, and to be honest it shows – giving off the distinct air of an act you are forced to go and watch in a poorly attended battle of the bands night that participants imagine A&R people will come to, when in reality it’s just their housemates, their slightly creepy module leader and five lads from Tech Crew who have terrible skin.

With graduation under their belt, Dominika, Benjamin and Casper relocated back to Prague to hone their eclectic “EDM style alternative electro-pop with hints of indie” sound and the result for Turin is “Lights Off”, a perfectly acceptable yet viciously forgettable three minutes of european dance music that they’ll love in the Euroclub but won’t be picking up the phone for across the homes of Poland or Estonia.

Guess what, fact fans! The Czech Republic has the highest castle-density in the world! There are 2,000 to Czech out! And “Czech out” is precisely what We are Domi will be doing from their hotel the morning after their semi.